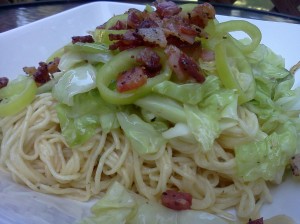 I have noticed this about myself:  I go through phases where I’m excited about cooking and trying new recipes, and  then I go through phases where I just get a little bored with it.  I find myself making the same simple things over and over, and it feels sort of blah.  One of the best things about joining the CSA at Basket of Life Farm  is that the beautiful, fresh produce they grow really keeps cooking exciting!

Today, I rushed home from work ready to try cooking something brand new – fried cabbage.  (Brand new to me, at least!)  I have to thank Audrienne (my Uncle Kim’s mother) for this idea – she knew I was looking for new cabbage recipes, and suggested that I try frying it.  I had never heard of fried cabbage, but when I asked my boyfriend, Brian, about it, he was amazed (and slightly appalled) that I had never tried it!  Brian suggested that I make it with buttered noodles and top it with some sliced hot peppers to kick it up.  I had one head of cabbage left, so that’s exactly what I did!

Now, from what I can find online, “frying” cabbage isn’t really frying the way I think of it.  It’s more of a saute – Audrienne, please tell me if I did it right!  It turned out to be a beautiful dish, and the bite of the hot peppers was perfect with the mild cabbage and noodles.

Here’s what I did:  I chopped a few strips of bacon and cooked them in a large, heavy bottom pan until they were crisp.  I removed the bacon from the pan and added some olive oil to the bacon fat.  I tossed in the sliced cabbage with a bit of salt and cooked that over medium heat until it was just a bit tender (maybe 8 minutes or so?  I wasn’t really watching the time – oops).  While that was working, I cooked some angel hair pasta from Ohio City Pasta, then tossed that in some herb butter.

I piled the noodles in a bowl, topped that with the cabbage, then added a Hungarian hot pepper sliced in rings and the bacon bits for garnish.  Pretty and tasty!

Goodies from Basket of LIfe Farm!

So today I went to Basket of Life Farm to pick up my first CSA box.  I had no idea how close to me the farm was – less than 10 minutes away!  The people are friendly and the farm is great.  Just behind the “sorting shed” where the CSA pickup is, I could see tons of chickens just happily running around.

Now, they say that the first box is always the smallest, so Heather at Basket of Life Farm told me that she made all the CSA folks homemade strawberry jam for a little something extra in the box.  The box also included a half dozen eggs from their chickens, garlic scapes, adorable little onions, a bunch of yellow squash, and a bag of cornmeal.  The cornmeal is organically grown in Holmes County at Stutzman Farms.  It looks fantastic, and I can’t wait to make some polenta!

The first thing I made from the box tonight was a garlic scape pesto – I haven’t actually eaten it yet, so I’ll post pictures later.  I did try a taste, though, and it’s good!  I’m thinking some pasta this weekend…

As soon as I post this, I’m going back to the kitchen to make some compound butters – one with thyme and garlic scapes, and one with sage and green onions.  Yummy!!

Here’s the garlic scape pesto recipe I used (I added some basil leaves as well, since I had cut the basil plant back yesterday and needed to use up the leaves):

As promised, here’s a plug for my CSA this year – Basket of Life Farm. The farm is on Quick Road in Penninsula, and this is their 10th year as a CSA.  My first pickup is next Friday (the 15th), so I haven’t been to the farm yet, but I’ve gotten a chance to talk to the owners via email and see some pictures.  They’re really nice and the pictures are great.

If this year’s boxes look anything like this, I’ll be happy! 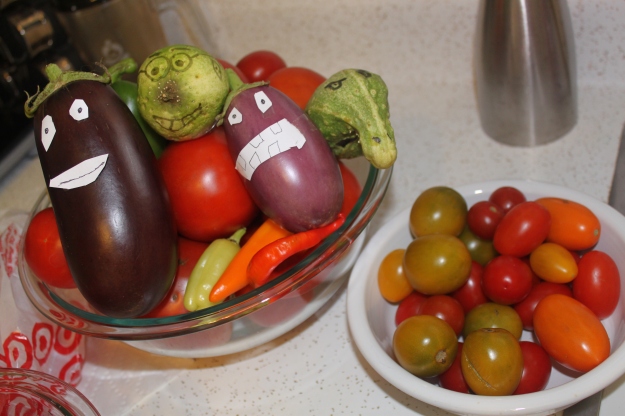 Elyse made a delicious Kohlrabi slaw for lunch. Luke approves.

Salt&Pants meets Luke the Cuke. Poor Luke is the homeliest cucumber I have ever seen. Thursday’s haul was huge. We even got corn!

Last Saturday was a beautiful day to go to the market to pick up our CSA. We went early to Haymaker Farm Market as we had a lot to do that day and we ran into Care’s sister, Casey, Joe, Tom, Jeff and a whole host of friends. So much for getting in and out. We hit the jackpot with our CSA from Birdsong Farms with wonderful potatoes, baby carrots, kale and peas. Carolyn and her sister Beth enjoyed talking with Matt and getting the lowdown on what is in the box for the week. It is always a pleasure to stop in and know our food is being grown by such a wonderful farm. Carolyn mentioned it is like Christmas when we open the box and we are never disappointed 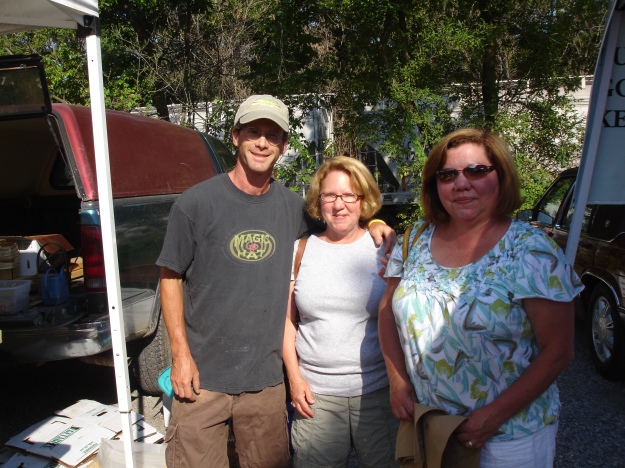 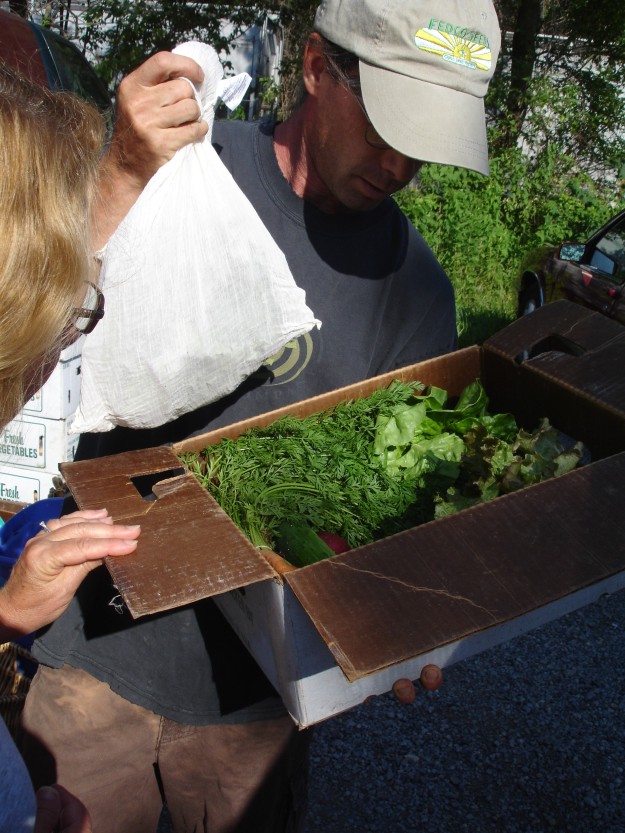 Care and Matt going over the goods!

I am not sure what we were thinking as we stopped at several booths picking up green and wax beans, some tomatoes, onions, red raspberries. I love summer.

What were we thinking?

We also stopped at Ohio City Pasta and picked up some tomato basil and mixed herb both winners! Again the people there are wonderful and expecting very soon!

Two things I look forward to doing this summer. Making a mess in the kitchen with our own pasta and even more of a mess with homemade italian sausage. I will take photos of the disaster when it happens.

Lettuce Never Squash Our Love
Create a free website or blog at WordPress.com.