The neighborboys have been on a travel adventure for the long weekend, which 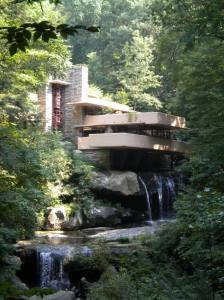 explains our blog absence.  We made a small loop through Pittsburgh and Buffalo – a busy but fun couple of days.  The first highlight was our stop at Fallingwater.  We’re big fans of Frank Lloyd Wright, and the house is arguably is his most famous and most photographed.  It was a thrill to tour it, and since we had tickets for the first tour of the day, we had the luxury of time to take lots of pictures and enjoy a quieter experience in nature.  The only thing the house was missing was the smell of a smoker and the sounds of friends sharing dinner outdoors!

Our time in the Buffalo included chicken wings at the Anchor Bar – the place that originated the Buffalo wing – and dinner alfresco in downtown Niagara Falls.  The weather was beautiful, so after dinner we drove over to Canada to enjoy a stroll on the Canadian side of the Falls.  Even Dusty enjoyed the beautiful views!  Our spoiled little boy is now an international traveler who has visited 12 states in less than a year.  Quite a life.

While we were gone, the best neighbors on earth were kind enough to pick up our CSA box (thanks again!), and it was definitely tomato-basil week.  Because of that, I decided to try my hand at making salsa this evening.  It’s improvised with onion, garlic, tomato, basil, green pepper, a touch of cilantro, salt and pepper, and shredded cheese.  One thing I did copy from an online recipe, though, is an idea for blanching the onion and garlic.  Rather than boiling and then shocking, I read a recipe that suggested putting the ingredients in a strainer and then pouring two cups of boiling water over them.  It worked just fine but didn’t require shocking in ice water.  I’d be curious to know if anyone else has done something similar, and I’d especially be interested in whether any real chefs do this.  Beth, what do you think Martha would say?  A quick method for some applications or a poor shortcut?

5 thoughts on “Travels and salsa”