Jeff and I privately refer to the Ohio City Pasta guy as Fabio.  (All you fans of Top Chef will hopefully recognize the reference.  I can’t remember his real name.  While I might be wrong, for some reason I think it starts with an “A” – Antonio?  Andy?  Alberto?  Anybody out there who can help jog my memory?)  Anyway, this past Saturday he spent several minutes gesticulating broadly while he described pasta pomodoro as only a passionate Italian could.

He described blanching the tomatoes, using lots of garlic and basil and olive oil, and topping it all with fresh herbs cut “after rolling up tightly – as in – you know – like – chiffonade style, yes?  You know chiffonade?”  I can’t accurately describe his syncopated speaking style and the mix of inspiration and (just a touch of) condescension as he described for us how to blanch a tomato and cut basil.  But the whole experience made us smile as Saturday mornings at the market always do this summer, so tonight I made pasta pomodoro in honor of our conversation.

I added green peppers and onion and scallions to simmer in a bit of chicken broth, as well as just a touch of tomato paste.  But otherwise it was just the rustic Italian meal he described.  I used both lemon basil pasta and the red pepper pasta, and their amazing flavor made for a great dinner. 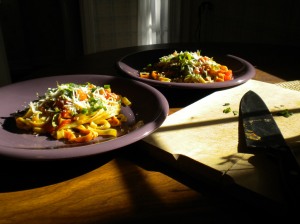